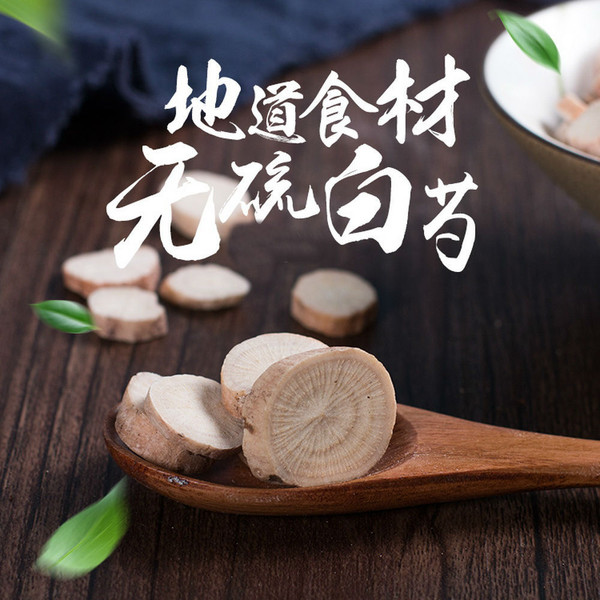 Type: Herb
Packaging: Bag
Origin: China
Description:
Another wonderful herb that finds frequent mention in classic Chinese medicine texts for its many wonderful healing properties is Bai Shao, more commonly known as the White Peony Root. The peony or the shaoyao plant is not just cultivated for its beautiful flowers but also for its medicinal roots. This herb is obtained by digging the roots of a 3-4 year old cultivated white peony plant in the summer and autumn, which is then washed and cooked in warm water and finally dried in the sun. The end result is a peeled root with a white to pink appearance. The "root" section of the peony is highly regarded by herbalists and Traditional Chinese Medicine practitioners for its emotional stabilizing and mental focus benefits.
The bitter sour and cool herb has been used in TCM as anti-spastic, anticonvulsant, analgesic, sedative, antipyretic, anti-inflammatory, antibiotic agent and to owers blood pressure, dilates peripheral blood vessels etc., as it nourishes Blood and liver, preserves the Yin, clams pain, etc., by promoting the function of liver and spleen channels.
Nourishes Blood and Preserves Yin
For Liver Blood Deficiency with symptoms such as dizziness, tinnitus, pale and dull complexion, and pale and brittle nails. For Liver Blood and Yin Deficiency causing Wind due to long standing heat from febrile disease with symptoms such as twitches, tremors, muscle spasms, alternating extension and flexion of the hands and feet, tonic-clonic spasms, or convulsions.
Nourishes Blood and Regulate the Menses
For chronic Liver Blood Deficiency causing Deficiency in the Ren and Chong Channels with symptoms such as dysmenorrhea, irregular menstruation, uterine bleeding, vaginal discharge, postpartum disorders, gestational disorders, and spermatorrhea.
Nourishes the Ying Level, Preserves the Yin, and Adjusts the Wei
For night sweating where the Yang moves to the inside of the body during the night, forcing out body fluids. For spontaneous sweating where the Wei Qi is weak and can not properly control the opening and closing of the skin pores.
Calms Liver Yang and Subdues Liver Wind
For Liver Yang rising caused by Liver Yin and Blood Deficiency with symptoms such as ringing in the ears, dizziness, vertigo, red eyes, flushed face, irritability, anger, headaches, and poor balance. In severe cases, there may be delirium, convulsions, or loss of consciousness.
Softens and Comforts the Liver and Alleviates Pain
For pain, cramps, or spasms in the sinews, tendons, and muscles. Also used to relieve pain in the intercostal, hypochondriac, and abdomen areas.
How to serve: In TCM, Bai Shao bulk herb is used in the daily dosage of 6 to 15 g. In most cases, bulk herbs are cooked in boiling water to make tea or soup for consumption. The herb is also administered in pill, powder and tincture forms.