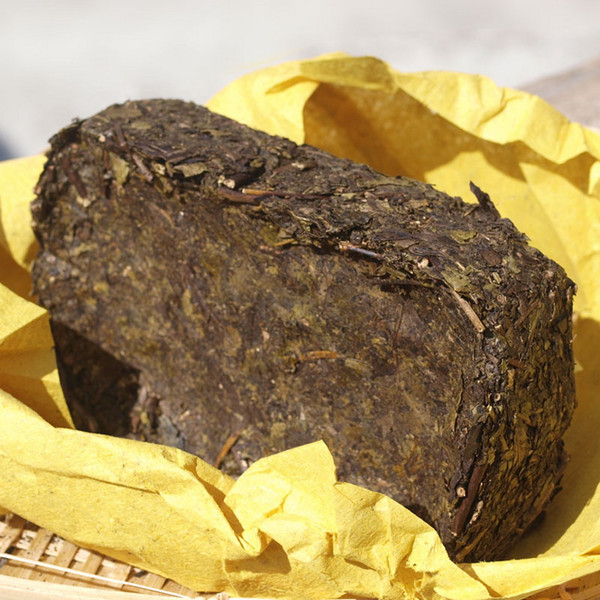 Type: Dark Tea
Package: Paper
Origin: China
Description: Ya'an in southwestern Sichuan province lies on a tributary of the Min River. It is a tea center for Western Sichuan and a highway hub for the Eestern Tibetan plateau. From 1950 to 1955 it was the capital of Xikang province. Ya'an held the key to the tea supply to Tibet and other minority areas since it held a monopoly over the trade, authorized by the imperial court. This is because of Ya'an's proximity to areas inhabited by ethnic groups, including Tibetan, Yi, Qiang and several other ethnic minority groups. Also, Ya'an has been a major tea producer thanks to its location on the fringe of the Sichuan Basin, that favors tea growth. Much of the tea produced in Ya'an historically went to Tibet.

A temple-like government office set up in 1047 during the Song Dynasty to manage the tea-horse trade still survives in Mingshan, one of the eight counties under Ya'an. At the time, some 7,500 tons of tea went to Tibetan inhabited areas from Sichuan every year, mostly via Ya'an. The tea was exchanged for horses during the ancient dynasties. Normally a horse was traded for 50 kilograms of tea but sometimes, as in the Reign of Yuanfeng (1076-85) of the Song Dynasty, for just 20 kilograms of tea. The Office of the Tea-Horse Department in Mingshan could handle 2,000 traders a day.
Dark Tea (Hei Cha) is an unique type of tea made by post fermentation with a more than 400 years history. In China, it is usually called Border-Sale Tea (Bian Xiao Cha), literally, tea sold on borders as it is commonly compressed into forms of bricks and sold in western minority areas of China. Its name comes from the color of dried tea leaves which results from old coarse raw materials and long time stacking fermentation during its production. According to the producing areas and production process, it can be divided into Hunan Hei Cha, Hubei Hei Cha, Sichuan Route Tea, Diangui Hei Cha and etc. For people who like delicate green tea, it is hard to get used to the strong and unique taste of Hei Cha at once while if they stick to drinking it, they would fall in love with the unique mellow flavor of dark tea.
It steeps up medium-bodied with buoyant, fresh, clean, sweet earthy notes in the aroma and taste. The woody malt sits heavily on the palate and a wet wood hui gan fills the throat leaving a lingering dark, nutty flavor in the mouth. You may infuse the same leaves many times. A delicious and unique tea. Its simple, dark, brooding demeanor gives it an intriguing and exotic sense of mystery and adventure.
Brewing Guide: We suggest that you rinse your tea leaves before enjoying them, simply add water to the leaves and discard. This wakes them up and they are ready to go. For your first steep, we suggest a 30-50 second steep. For the second steep 10 seconds is best, simply add 5 seconds to each of your next steeps. This will allow you to experience the full range of tastes the leaves have to offer.
These steeping directions are for a traditional Gong Fu style tea, if you are brewing this tea in a regular cup we recommend steeping for 2 – 3 minutes. This tea can be steeped 4 times.