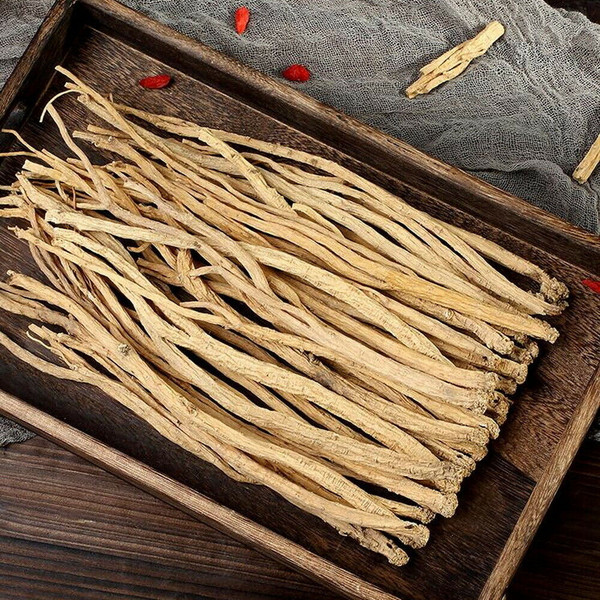 Type: Herb
Origin: China
Description: Codonopsis is a twining perennial. It reaches a length of five feet, and has oval leaves and distinct bell shaped greenish purple flowers. It is native to Asia and China, but now cultivated worldwide, sometimes only for its ornamental value. The long, sweet taproot is used extensively in herbalism.
This herb, has long been used to help improve overall vitality and prevent illness, and current research is just catching up to traditional wisdom. The extract of the Codonopsis pilosula is known as “codonopsis” in western medicine, and as “dang shen” in Eastern traditions. Codonopsis pilosula is no stranger to most Chinese since this herb is a common ingredient in the everyday recipes of soups and steamed dishes. In China it is better known as Dang Shen, a major tonic for nourishing the vitality. As you may know, ginseng is another key Qi tonic. So here comes a question: what is the difference between them? Simply put Codonopsis has the similar but weaker efficacy compared to ginseng. But when it comes to the price, the former is much cheaper and totally affordable. For that reason Codonopsis is often under the title of “the poor’s ginseng” and widely used as its alternative.
Codonopsis is commonly used in TCM thanks to its tonic nature. As a matter of fact, nowadays more and more codonopsis health benefits are being discovered along with the scientific progress. And Modern research found that it contains a variety of sugars, phenols, volatile oil, baicalein glucosinolates, saponins and trace alkaloids, which can enhance immunity, dilate blood vessels, lower blood pressure, improve microcirculation, enhance hematopoietic function, and so on. In addition, it also improves the leukopenia induced by chemotherapy and radiotherapy.
Brain Health
Codonopsis has been shown to stimulate the central nervous system. One California study found that combining supplemental codonopsis along with ginkgo biloba boosted cognitive function and overall health more effectively than ginkgo alone. Thus, this combination can be used to help boost health and vitality of the brain and entire body.
Stomach Acid and Ulcers
Animal studies have shown that codonopsis supplementation can reduce the secretion of acid and digestive enzymes in the stomach. This can potentially help to protect the digestive lining in those suffering from ulcers.
Blood Thinning
In recent research, codonopsis was found to help prevent platelet aggregation in people suffering from coronary artery disease, which can help to prevent clot formation and potentially reduce the risk of heart attack. This can also help to reduce high blood pressure in those with hypertension.
Immune Boosting
Supplementation has been found to increase red and while blood cell counts. It has also been found to promote healthy weight gain, which can help protect depleted individuals. It is also an excellent immune tonic that can be used during the winter months to help treat colds, flus and lung infections such as bronchitis. It is commonly used in China to treat wheezy and dry coughs. This is likely why this herb is considered a general tonic in Traditional Chinese Medicine.
Fatigue and Stress
Codonopsis is classified as an adaptogenic herb. It has the ability to defend against high levels of stress, anxiety, trauma, and fatigue. When taken in a remedy, it can help to improve stamina levels while suppressing the bodies need to produce stress related hormones such as norepinephrine and epinephrine. Your body needs these hormones to help deal with stressful situations however, excess amounts in the blood can cause a number of health problems.
Dang Shen bulk herb we sell is of premium quality. The harvests of right species at proper maturity are identified by experienced professionals, cleaned, cut and dried.
How to use: Codonopsis can be taken alone as powdered root directly or in a tea. Dang Shen bulk herb is used in the daily dosage of 9 to 30 g. In most cases, bulk herbs are cooked in boiling water to make tea or soup for consumption. It can also be found in tincture form.