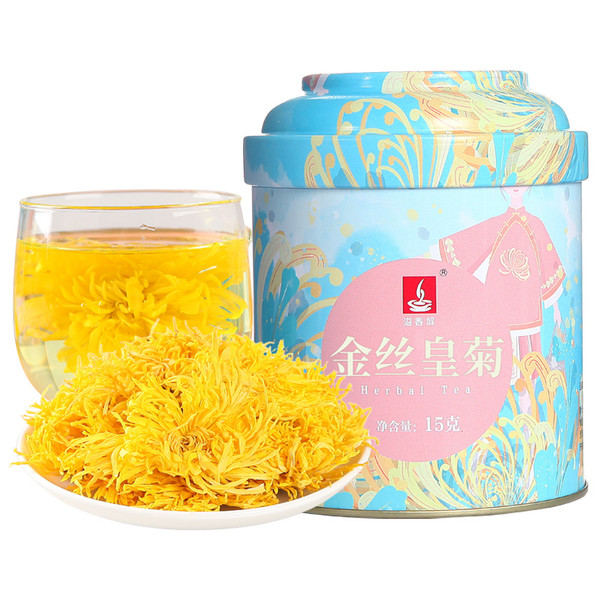 Type: Floral
Origin: China
Description:
Chrysanthemum tea is a flower-based infusion beverage made from chrysanthemum flowers of the species Chrysanthemum morifolium or Chrysanthemum indicum, which are most popular in East Asia, especially China. Chrysanthemum tea has been brewed in Asia for thousands of years, playing an important role in traditional medicine and as a delicious and nourishing beverage.
It is believed that it was first cultivated in China in the 15th century BC where it was revered by poets and artists. Chrysanthemums were a symbol of nobility and integrity. As a herbal tea, it was first brewed and popularized during the Song Dynasty (960 AD - 1279 AD) and for centuries it was used to treat respiratory issues, blood pressure irregularities and to calm the nerves. This flower was only brought over to Japan in the 8th century AD, where it was adopted as the Emperor's official seal and the symbol of the imperial throne.
Chrysanthemum tea is still consumed by millions of people in China, Korea, Singapore and Japan every day. It is a favorite summer tea, loved for its cooling effect on the body as well as its traditional health benefits. This blend of components makes this tea not only tasty, but good for your health as well, and you may drink it to reap a number of benefits.
1. Chrysanthemum tea has Vitamin C in which helps ease heaviness in the head during cold and provide relief in sinusitis discomfort. This herbal tea also has antiviral properties and helps relieve congestion in the head which may be caused by viral infection. The heaviness in the head could also be caused due to bacterial pathogenic reaction. Chrysanthemum tea is anti spirochetal in nature thus it is really helpful in easing head congestion.
2. Chrysanthemum tea is naturally caffeine free, hence, it is free from all the side effects of caffeine like anxiety, tension, irritation, nervousness and confusion.
3. Chrysanthemum tea is a natural coolant and helps in lowering the temperature of the body when suffering from fever or even heat stroke. This herbal tea is also helpful in treating pimples and acne. It can also treat discomfort of high temperature such as headache, slight toothache and throbbing nerves in the gums.
4. Chrysanthemum tea is good for the detoxification of the liver and for lowering cholesterol levels.
5. This tea helps in the treatment of coronary artery disease, blocked arteries and even varicose veins.
6. Chrysanthemum tea has stimulating property and helps in alerting the senses and rejuvenating the brain. It stimulates all your senses very quickly and also calms down the nerves.
7. It helps in easing giddiness.
8. Drinking Chrysanthemum tea helps in providing relief in sore throat, redness in the eyes, itchiness in the eyes, dryness in the eyes and dark sport in the eye area.
9. It makes the lungs strong and helps in providing relief in respiratory problems such as shortness of breath.
10. Chrysanthemum tea when taken with lunch or dinner especially with oily foods helps ease digestion.
Brewing Guide: To prepare the tea, chrysanthemum flowers are steeped in hot water (usually 90 to 95 degrees Celsius after cooling from a boil) in either a teapot, cup, or glass; often rock sugar or cane sugar is also added, and occasionally also wolfberries. The resulting drink is transparent and ranges from pale to bright yellow in color, with a floral aroma. In Chinese tradition, once a pot of chrysanthemum tea has been drunk, hot water is typically added again to the flowers in the pot; this process is often repeated several times.
Chrysanthemums are also steamed or boiled and eaten in salads. The leaves are particularly appreciated as a vegetable dish. Flowers and leaves may be added to stews or soups in Asian cuisine as it is said to help thicken the liquids.