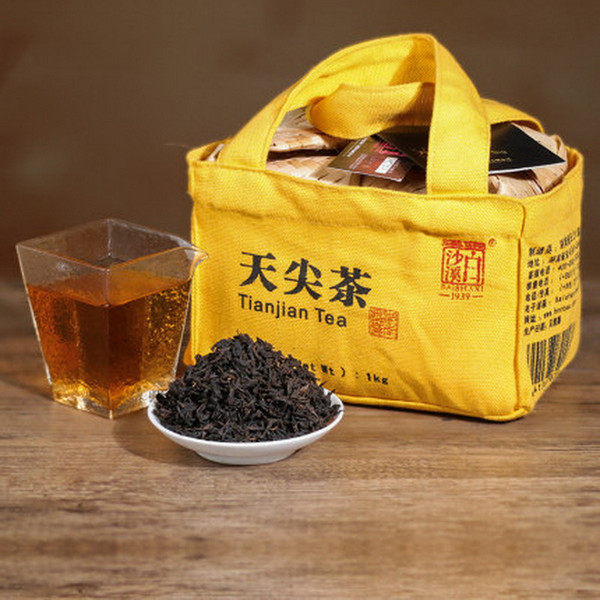 Type: Hei Cha
Packaging: Bamboo Shell
Origin: China
Description: Tian Jian Tian Jian means "heavenly tippy tea" in Chinese, and it describes the finest grade of dark tea. Our Tian Jian dark tea is from Hunan province which is famous for making some of the best dark teas available. Tian Jian is the top grade of three teas that are made throughout this region of Hunan – Tian Jian, Gong Jian and Shen Jian. The related beginning Hei Cha record, we can see Tang Dynasty Yang Ye” Imperial food steward To handle Record” as well as Five Dynasties Mao Wenxi “Tea Spectrum” the “Qu Jiang thin slice, catty 80”. The Production of Hei Cha, began in tea early of the 16th century, According to “the Ming Dynasty History Tea Law”, as early as in the Ming Dynasty Jiajing Three Year, namely in 1524, Hei Cha was stipulated as the Official Tea transported to north-west which was needed by the national minority people, and became there necessity. Till today, there is still a famous saying,” One would rather go without cereal for three days than be denied tea for one single day.”
Tian Jian is dried over a low pine wood fire, so the aroma of the tea has hints of pine and leather mixed with the clean smell of the forest floor after a cool spring rain. Tian Jian wears only a light smoking, so it is more similar to Zheng Shan Xiao Zhong that the bold, heavily smoked Western-export style of Lapsang Souchong.
The appearance of the tea is reminiscent to that of loose-leaf shou Pu-erh: brown and irregular in size and shape with a ‘dusty’ appearance. The leaf is thick and dark brown in color and is irregular in appearance. After firing, the leaf is packed in large bamboo baskets and stored in aging rooms with natural ventilation that allows the tea to continue to breathe and change. When the tea is ready to sell, it is repacked into smaller bamboo baskets or into bags. Tian Jian is not a fancy, hand-shaped leaf, but something simpler that is representative of China’s great body of regional teas that are unique, charismatic and delicious.
This tea is clean and smooth with an light earthy and smokey body. The flavor of this Tian Jian is very nuanced and unlike anything else we have ever tasted. On first sip it has a clear, slightly resinous pine forest aroma and flavor. Subsequent drinking reveals a taste of dark red cherries (like Morello) and cherry stones and a slight suspicion of cinnamon & star anise. All of this is carried on an undercurrent on a base of syrupy rock sugar. Unlike shou Pu-erh, Tian Jian is only lightly fermented so it has very little fermented taste – in fact, with eyes closed, we think that some Tian Jian smells reminiscent of some fresh, clean and subtle sheng Pu-erh or certain Maocha. In fact, Tian Jian is rather sweet and mild with the extra bonus of a little pine wood smoke to complete the seduction. It will aid with digestion, promote organ health, and help lower cholesterol and blood lipid levels.
Brewing Guide: Before brewing, hot rinse this tea by pouring boiling water over the leaves and discarding the water. Use 2 teaspoons of tea (about a quarter sized piece) per 8-12 oz of water. Steep for 2 minutes with boiling water.