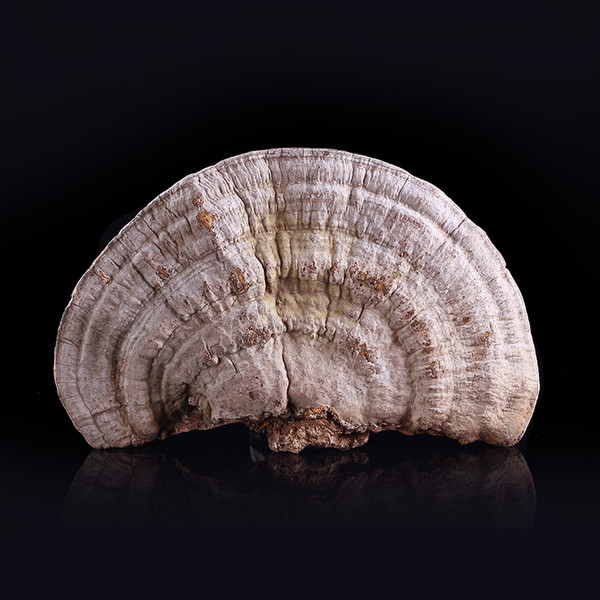 The mushroom Ganoderma lucidum goes by many different names. Reishi is the most popular in the West. But it’s also referred to as Lingzhi, king of mushrooms, soul mushroom, and many other names.
Whatever you choose to call it, this mushroom has a long and rich history of medicinal use. It is one of many mushrooms with medicinal benefits.

Chinese healers began to use the mushroom in the Changbai mountain range in Northern China during the Han dynasty more than 2,000 years ago. In Chinese, the word lingzhi literally translates as “the mushroom of immortality,” “magic fungus” or “divine mushroom.”

Reishi naturally grows mostly throughout the temperate and tropical regions in Asia. Although it is found worldwide. It grows at the base of deciduous trees, especially maple. Out of 10,000 maple trees that meet the right conditions to grow reishi, only about 2 or 3 will actually have reishi growth, which makes the mushroom extremely rare in the wild. Depending on the conditions and materials used to grow reishi, it can either grow into a large umbrella cap or more of an antler shape.

Reishi mushrooms produce a group of compounds called ganoderic acids. These are molecularly similar to steroid hormones, which are substances in the human body that control a wide range of functions including metabolism, immunity, inflammation, the ability to withstand injuries and illness, salt and water balance, and more. Reishi also contains polysaccharides such as coumarin, beta glucan, mannitol, and alkaloids.

The Health Benefits Of Reishi Mushrooms

1) Antioxidant
Reishi mushrooms are full of antioxidants. Consuming foods and other supplements that are rich in antioxidants can help to prevent cancer and other chronic illnesses.

Antioxidants protect the cells in your body against damage from free radicals, known as oxidative stress.

2) Boost Your Immune System
Like many varieties of mushrooms, reishi contains beta glucan which can boost your immune system.

Taking reishi on an ongoing basis can help keep you overall healthier and more prepared to fight off any disease or infections.

You can take it year-round, or may choose just to use it as a preventative right before and during cold and flu season.

3) Fight Viral And Bacterial Infections
Many mushrooms contain a wide variety of antifungal, antibacterial, and antiviral properties. Reishi is no exception.

We are living in a world where more and more infectious diseases are becoming antibiotic resistant, and reishi may be one tool that we have to fight back.

It could be combined with existing medicine to potentially lower the amount of conventional drugs needed, reducing the risk of side effects and other complications.

4) Lowering The Risk Of Heart Disease
The triterpenes found in Ganoderma mushrooms are lipid-lowering. They can lower blood pressure and the amount of bad (LDL) cholesterol in the blood.

Consuming reishi mushrooms can help to protect against heart attacks, strokes, and other types of heart disease.

5) HIV/AIDS And Other STIs
Some of the triterpenes found in reishi have been found to have an inhibitory effect against the human HIV virus.

Reishi has also been shown to improve recovery time in patients with herpes and inhibited the replication of the hepatitis B virus.

6) Cancer
Reishi shows great promise in preventing, slowing the spread of, and potentially even curing cancer.

Right now there is insufficient evidence to justify using reishi as a first-line cancer treatment. But it has shown a variety of anti-tumor properties and other benefits that can be used alongside conventional treatment to improve the chances of successful recovery.

7) Diabetes Mellitus
Reishi may be useful in managing diabetes. The mushroom has been shown to have a hypoglycemic (blood sugar lowering) effect in animals.

In one study with obese and diabetic mice, a reishi hot water extract administered for 4 weeks was shown to lower serum glucose levels and increase insulin levels.

Some studies have been done on humans as well; 71 adults with type 2 diabetes were given a polysaccharide extracted from reishi for 12 weeks. After 12 weeks, their plasma glucose had decreased significantly, which confirms the extract had a hypoglycemic effect.

8) Liver And Gastric Injury
Reishi has a hepatoprotective (or antihepatotoxic) effect. That means it has the ability to prevent damage to the liver.

In China, reishi has been used in cases of mushroom poisoning where people have ingested other poisonous mushrooms like Amanitas. Reishi was shown to reduce the amount of liver damage suffered.

Consuming reishi may be a way to prevent or limit injury after someone consumes poison or too much alcohol, although more research is needed to fully evaluate the scope of its applications in this area.

It offers anti-inflammatory and anti-allergenic properties without interfering with the normal homeostasis in the body.

That means it can help reduce your body’s response to seasonal allergies, as well as decreasing the severity of conditions such as autoimmune disorders, asthma, bronchitis, irritable bowel syndrome, rheumatoid arthritis, and more.

10) Improve Physical Fitness And Exercise
In studies, reishi has been shown to inhibit the accumulation of lactic acid in the blood and accelerate lactic acid clearance. Lactic acid is a metabolic byproduct that your body produces during exercise. If too much lactic acid builds up in your blood it can cause muscle aching, burning sensations, stomach pain, and rapid breathing. If you’ve ever started doing intense exercise after a long period of inactivity, you’ve probably experienced lactic acidosis.

Reishi may be helpful in preventing these uncomfortable side-effects that can accompany intense exercise.

Reishi also improves your body’s glycogen reserve (ability to store carbohydrates as glucose) and also reduces the amount of glycogen that your body consumes during exercise. This results in less fatigue feeling.

11) Chronic Fatigue Syndrome
Chronic fatigue syndrome is a debilitating disorder where you feel extremely tired or fatigued all the time. The feeling doesn’t go away with rest, and has no underlying medical condition to explain it.

Right now there is no proven medical treatment available for CFS. However, reishi may be able to help.

In a small study done with 50 people suffering from CFS who were given G. Lucidum extracts for 12 weeks. Those that received the extract were significantly more satisfied than those who received the placebo. Side-effects between those who received reishi extract and the placebo were similar. The study concluded that reishi could potentially be effective for improving the quality of life for CFS patients.

12) Anxiety And Insomnia
There is plenty of anecdotal evidence online for the use of reishi in treating anxiety, insomnia, and other potentially stress-related conditions.

In traditional Chinese medicine, reishi has been used for these purposes as well.

Harvested from wild and dired under the sun directly. Each one is differnt in size and color. Some small bits of dirt, grass and moss may be found in the dried mushrooms. All natural, wash and clean it before use.

How to use: To consume reishi, it’s traditionally made into a hot water extract (a soup or tea.) Fresh or dried pieces of reishi are sliced up or pulverized into a powder and added to boiling water.

The mushroom is then left to simmer for about two hours. Sometimes this process is repeated to make the liquid even more concentrated. This creates a dark and bitter tasting drink.