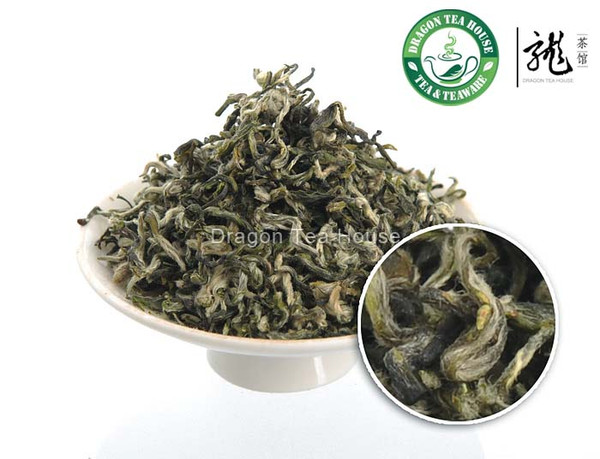 For centuries this very famous aromatic light green tea was known by the name 'Xia Sha Ren Xiang' (Astounding Fragrance). A legend explains why. Once in the distant past, some pickers of a particularly good crop filled their baskets before they were ready to go home. Wanting to carry more leaves, they stuffed the excess inside their tunics. By another version they were stealing the tea. Warmed by body heat, the leaves began to give off a rich aroma. "I was astounded," many pickers said, and the name stuck. Sometime in the late seventeenth or early eighteenth century while on an inspection of his realm, Emperor Kang Xi visited the Lake Taihu area in Zhejiang province and his host, the governor of Jiangsu, presented him with this tea. Striking the Emperor as a tea of purity he asked the name. "Astounding Fragrance" was his host's reply. The Emperor, with disdain, replied that such a name for this treasure was vulgar and an insult. Ordering the unused leaves brought for his examination, the Emperor declared that a more fitting name would be Green Snail Spring because the rolled shape looked like a snail shell. The original name is most popular, however.

Peach, apricot and plum trees are planted among the bushes where tea trees grow nearby. When these fruit trees bloom, the tender spouts and buds of tea absorb the aromas to be passed on to those who drink their infusion. The name is now known all over the world, for this is one of China's famous rare teas. Its home is two mountains known as Dong Shan & Xi Shan (East and West) Dongting which poke up out of Taihu, the great lake not far west of Shanghai, and where the garden city of Suzhou is located. One mountain is an island in the lake and the other a peninsula. The water evaporating from the lake keeps them overhung with clouds and mist, thus the young leaves stay moist. The prime time to pick the tea leaves is during the QingMing festival when the buds are jade-green tinged with white. Bi Luo Chun is picked during the spring until April when the spring rains begin. Only one leaf and the bud are plucked. Harvesting is done completely by hand and great skill is required to roll and fire the leaves. Bi Luo Chun was selected as the offering of local government to the emperor in Qing Dynasty.

The leaf of Pi lo Chun is tiny and comes out spiral shaped; the brew is clear and golden and of exceeding delicacy.In the cup its skillfully hand-crafted, downy leaves unfold to produce a delicate, aromatic, light golden liquor which opens with a fresh, crisp astringency and develops into a well-rounded sweetness with a lingering, mellow, slightly buttery, finish. A unique, superior tea with much in it to discover and appreciate. Preperation: We recommend a covered steeping cup. Preheat the cup with hot water and fill with 1-2 teaspoons of leaf. Cover with relatively cool water, 55-65C, 131-149F and infuse for 2 or 3 minutes. To serve, pour into a pitcher or directly into warmed cups and enjoy. Bi Luo Chun may be reinfused several times by gradually increasing steeping time and water temperature.

Note: Any Bi Luo Chun that is not made in Dong Shan, Suzhou City must be a fake one.