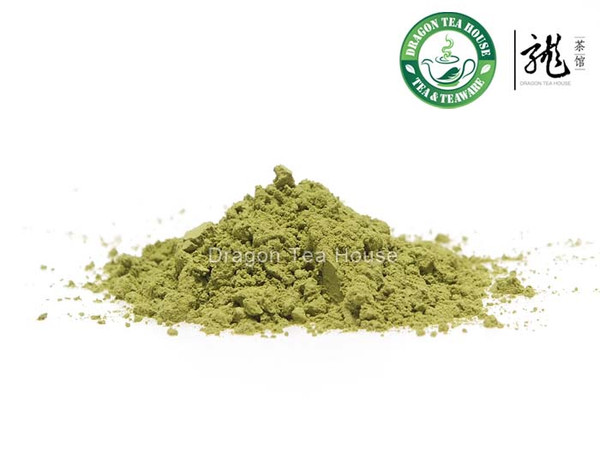 Matcha is a variety of fine, powdered green tea used particularly in the Japanese tea ceremony, as well as to flavour and dye foods such as mochi and soba noodles, green tea ice cream and a variety of wagashi (Japanese confectionery). Matcha is made from shade-grown tea leaves also used to make gyokuro, unlike other forms of powdered tea, such as powdered sencha.

In Tang Dynasty China (618-907), tea leaves were steamed and formed into tea bricks for storage and trade. The tea was prepared by roasting and pulverizing the tea, and decocting the resulting tea powder in hot water, adding salt. In the Song Dynasty (960-1279), the method of making powdered tea from steam-prepared dried tea leaves, and preparing the beverage by whipping the tea powder and hot water together in a bowl became popular. Preparation and consumption of powdered tea was formed into a ritual by Zen Buddhists. The earliest Chan monastic code in existence, entitled Chanyuan qinggui (Rules of Purity for the Chan Monastery, 1103), describes in detail the etiquette for tea ceremonies. A bowl of matcha on a black lacquered tray with a traditional sweetZen Buddhism and, along with it, the Chinese methods of preparing powdered tea were brought to Japan in 1191 by the monk Eisai. Powdered tea was slowly forgotten in China, but in Japan it continued to be an important item at Zen monasteries, and became highly appreciated by others in the upper echelons of society during the 14th through 16th centuries. Along with this development, tea plantation owners in Uji perfected techniques for producing excellent tea for matcha. It was thus able to live on in Japan, develop, flourish, and gradually giving rise to the iconic Japanese Tea Ceremony we know today.

The preparation of matcha starts several weeks before harvest, when the tea bushes are covered to prevent direct sunlight. This slows down growth, turns the leaves a darker shade of green and causes the production of amino acids that make the resulting tea sweeter. After being picked, fresh tea leaves are processed the same day. These tea leaves go through six steps: steaming, drying, sorting, drinding with a stone mill. After harvesting, if the leaves are rolled out before drying as usual, the result will be gyokuro (jewel dew) tea. However, if the leaves are laid out flat to dry, they will crumble somewhat and become known as tencha. Tencha can then be de-veined, de-stemmed, and stone ground to the fine, bright green, talc-like powder known as matcha. It takes one hour to grind 40g (1.41 oz) of top-quality Matcha with a stone mill. The result is a finely-textured powder.

Fine matcha uses the best leaves. These are found in the tips of the green tea tree (Camellia Sinensis), otherwise known as the flush or new growth. Storage, the stone grind, and age can all effect the quality of your maccha. The stone grinding process is an artisan technique and a bad grind can ruin otherwise premium matcha. Humidity, time, and strong odours also have the potential to ruin your tea.

The higher the grade, the:

The lower the grade, the:

We at have gone to great lengths to locate only the finest teas available and have hand picked and personally chosen our teas after directly visiting the tea farms and speaking with the owners. Dragon Tea House' top grade matcha use fresh leaves plucked in organic tea garden in early spring, it is then ground by stone other than machine. The product reaches 1600 mesh untrafine which represents top quality on the market. We deal directly with the farmers so that our green tea goes straight from the farm to your doorstep. Open our fresh sealed matcha and allow the fragrance to permeate your senses. Allow the smell of the freshly harvested tea to uplift your mind and transport you to the cascading tea fields.

Brewing Guide A small amount of matcha is placed into the bowl, traditionally using a bamboo scoop called a chashaku, then a modicum of hot (not boiling) water is added. The mixture is then whisked to a uniform consistency, using a bamboo whisk known as a chasen. There must be no lumps left in the liquid, and no ground tea should remain on the sides of the bowl. Because matcha can be bitter, it is traditionally served with a small sweet.

Usucha, or thin tea, is prepared with half a teaspoon of matcha and approximately 75 ml (2.5 oz) of hot water, which can be whisked to produce froth or not, according to the drinker's preference (or to the traditions of the particular school of tea). Usucha creates a lighter and slightly more bitter tea. 100g yields about 60-70 servings.

Note: The depicted tea bowl, matcha whisk and scoop are shown for illustration purpose only. They must be purchased separately.