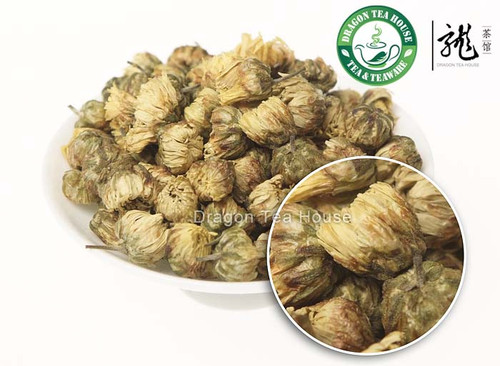 Chrysanthemum tea is a flower-based tisane made from chrysanthemum flowers of the species Chrysanthemum morifolium or Chrysanthemum indicum, which are most popular in East Asia. Chrysanthemum tea has adenine, choline, vitamins A, B, amino acids, glycosides, volatile oil and more. It is a high class drink. The resulting drink is transparent and ranges from pale to bright yellow in color, with a floral aroma. It is a nerve energizer, detoxifier and blood vessel softener in Chinese medicine to maintain healthy cholesterol level, normal blood pressure, improve blood flow. Used to "sharpen the vision and hearing, calm the nerves and clear the brain", it remains one of the most important supplementary food items and longevity elixirin China. It is an ideal beverage for cold and flu season, and for general health.

Different from common Chrysanthemum flowers, our selected top grade fetal Chrysanthemum bud is the best among chrysanthemum flowers which is known as Tai Ju. It is plucked from certified organic gardens in very early spring before it full blooms. There are strict standards to pick buds, it is not too big nor too small to make sure each one is equal in size, always pick one from the top of one plant only so that the flavour is sweet. The bud is then dried and kept in cool places quickly to keep it fresh. When you make a cup of it, a light floral scent lifts from its surface, reminiscent of early spring's blossoms. The tea itself is nearly transparent but for the yellow buds or petals of the Chrysanthemum floating in the glass. A sip of the tea by itself is an intriguing and refreshing infusion of a slightly sweet and slightly bitter flavor. Caffeine free and satisfying, it can be a relaxing hot cup of tea in the morning.

As an important food supplement and tonic, chrysanthemum has been used in China for more than two thousand years. The Shen Nong's Canon of Materia Medica compiled before the Christian era, rated it as a superior herb the use of which prolongs life. Its central pharmaceutical properties recorded in traditional Chinese medical manuals, are, "pacifying the liver and brightening the vision, relieving fever and removing toxins".

The last eight emperors of China averaged 53 years and the average life span at that time was about 50. The famous Empress Dowager Ci Xi who ruled China for 43 years however, lived 73 years, and was able to keep a young body! According to analysis, it was mainly because she adhered to a herbal diet. Of all the herb foods she loved and used chrysanthemum longevity jelly the most. During her last years she used it every day.

Chrysanthemum is available in three forms, some stores just sell dried flowers, some market its extract, while some others provide herb tea with it. Now more and more people are enjoying the loving care of this "mum".

To prepare the tea, 3~5 chrysanthemum buds are steeped in hot water (usually 90 to 95 degrees Celsius after cooling from a boil) in either a teapot, cup, or glass; often rock sugar is also added, and occasionally also wolfberries. Add a little more honey can increase the deliciousness of the tea, can also mix with other tea such as puer. In Chinese tradition, once a pot of chrysanthemum tea has been drunk, hot water is typically added again to the flowers in the pot (producing a tea that is slightly less strong); this process is often repeated several times.