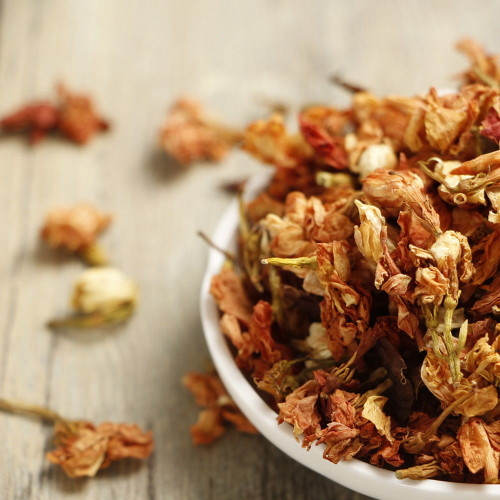 Type: Herbal
Packaging: Bag
Origin: China
Description: Luohanguo is a cousin of the cucumber, and a member of the gourd family of fruits. Luo han guo has been used for centuries in China and in Southeast Asia for its sweet flavor and medicinal properties. Historic writings record Song Dynasty monks brewing it as a medicinal beverage more than 800 years ago.
In southern China, luo han guo flower is popularly considered a longevity aid and is used to balance heat buildup caused by internal conditions, life-forces, or external heat. It is used as an expectorant and antitussive to treat lung congestion, cough, other respiratory ailments, and sore throat. It also is used for constipation and chronic enteritis.
Benefits of this herb are,
Relieves Allergy
When our bodies experience something to which we are "allergic", our body's mast cells release a number of chemicals into our system, one of which is histamine. This is what causes allergic reactions like inflammation, irritation, coughing, and every other symptom of allergies. The extract of monk fruit flower has been proven to prevent this activity of mast cells, reducing the histamine and eliminating common allergies. This chemical is also connected to reducing asthmatic reactions, which can save lives.
Anti-aging Properties
There is a unique statistic about the regions in which monk fruit naturally grow; there is a much higher than average number of centenarians per capita. In other words, people who regularly use and consume monk fruit seem to live longer. Obviously, this is based on population statistics, but the antioxidant properties do have an effect on the general "breaking down" of the body as we age, making this a powerful anti-aging fix.
Improves Heart Health
Monk fruit's organic components also prevent cholesterol from oxidizing, which is what happens before that cholesterol builds up into plaque within the arteries and blood vessels. Therefore, monk fruit has the potential to lower risks of heart attack and strokes by preventing the development of atherosclerosis.
Boosts Immunity
This herb also contains a moderate concentration of vitamin C, which is one of the most important vitamins for human health. Apart from its stimulating effect on the production of white blood cells in the body, vitamin C is also important for the production of collage, which our bodies need for the creation of cells, muscle tissue, and blood vessels. The special glycosides found within monk fruit, more specifically known as mogrosides, have also been linked to preventing various viral infections, including the Epstein Barr virus.
Reduces Inflammation
In Chinese herbal medicine, monk fruit was often relied on as a "cooling" agent in various drinks and medicinal preparations. For example, if you were suffering from a fever, inflammation of the joints, or heat stroke, the anti-inflammatory properties of monk fruit could help eliminate those afflictions when the fruit juices were mixed with water or consumed directly.
Brewing Guide: Rinse tea cup and teapot with hot water. Fill the teapot 2 grams (1-2 teaspoons) flowers for every 225ml of water. Infuse in hot water at 90°c (194°F) to 95°c (203°F) for 2 to 3 minutes for the first and second brewing. Gradually increase steeping time and temperature for subsequent brewing.
×