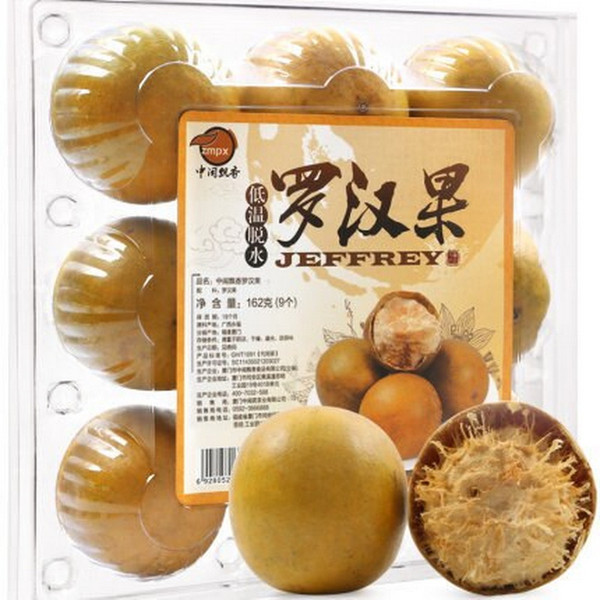 Luo Han Guo refers to the fruit of Siraitia grosvenori, formerly called Momordica grosvenori, a member of the Curcubitaceae. Luohanguo has been used as a medicinal herb for treating cough and sore throat and is popularly considered, in southern China, to be a longevity aid. Luohanguo is primarily grown in southern China, mainly in Guangxi Province, with most of the product from the mountains of Guilin. The steep mountains provide shade and they are frequently surrounded by mists that further protect against excessive sun, yet the temperature in this southern province is warm. The wild plant is rare, thus luohanguo has been cultivated in the region for many years. There are descriptions of its cultivation in the area dating back to 1813. During the Tang Dynasty, Guilin was a major Buddhist retreat area with many temples. The fruit (guo, a term used mainly for gourd-like fruits) is named after the luohan, which are advanced Buddhist practitioners (see classic painting of some luohan, left; in India, they are called arhats) The story told in China is that knowledge of this fruit first emerged from monks who were using it during the 13th Century. Due to its limited natural growing area (mainly mountain sides in Guangxi and Guangdong; to a much lesser extent, in Guizhou, Hunan, Jiangxi, and Hainan Island), and difficulty in cultivating it successfully, this fruit did not enter the general herb tradition of China, which depended on more abundant products. So, it is not mentioned in the traditional herb guides.

Luohanguo is collected as a round green fruit that turns brown upon drying. The sweet taste of luohanguo comes primarily from mogrosides, a group of terpene glycosides. Dried fruit may be bought in the city markets. The outer surface of the dried fruit is round and smooth, dusty yellow-brown or dusty green-brown. It is covered with fine, soft hair. The fruit is covered by a hard but thin shell. Inside is a partly dry, flexible substance containing the juice, as well as a large number of seeds. The skin, juicy part, and seeds all have a good sweet flavor. Its nature is cool, and it has no poison. The fruit helps relieve sunstroke, moistens the lungs, eliminates phlegm, stops cough, and promotes bowel movements. Recent work on luohanguo includes investigation of the antioxidant activity of the mogrosides and their potential use as cancer prevention compounds. This suggested effect is based on the understanding that antioxidants can produce significant reversal or suppression of the early stage of cancer development, which has been an area of particular interest for tea drinking. Further, luohanguo and its sweetening component are often mentioned in relation to diabetes and obesity, because it can substitute for caloric sugars normally consumed in the diet.

Applications: 1. Heat stroke with thirst: Take one fruit, break it open and stir into boiled water. Drink the liquid in place of tea. 2. Acute or chronic throat inflammation; aphonia. Take half a fruit and 3-5 seeds of sterculia. Cover with water and simmer, then swallow very slowly. 3. Chronic cough. Take 1 piece of fruit, cover with water, simmer, and drink the liquid. Do this twice each day. 4. Constipation in the aged. Take 2 pieces of fruit, obtain the juicy part and the seed (put the shell aside for other uses), break apart, cover with water, and simmer. Drink before going to bed. 5. Diabetes. Take an appropriate measure of the fruit and crush it or simmer it into a thick juice and add to food being prepared, using it as a substitute for sugar.