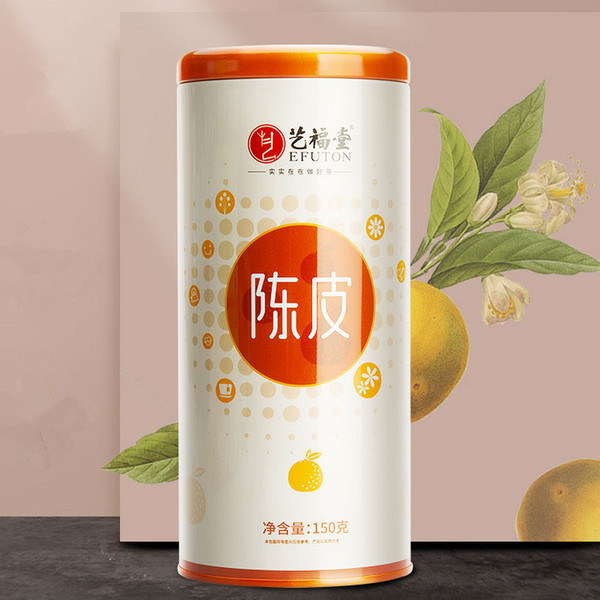 Type: Herbal
Origin: China
Description: Also known as the Pericarpium citri reticulatae, it refers to the dried peels of Citrus reticulata Blanco and its cultivars, one type of rutaceous plants. In China, it mainly grows in Guangdong, Fujian, Sichuan, Zhejiang, Jiangxi and other provinces. Not all tangerines make good peel, however. There are many farms in southern China, stretching from Zhejiang to Guangzhou, that grow cultivars such as cha zhi gan, mi gan, and fu ju, but the best peels are said to come from Xinhui. This district in Guangzhou has a unique cultivar known as Dahongpao, a peel that is often referred to in most Chinese medical books and literature.
The best timing for harvest is when autumn changes into winter. At that time the fruits are ripe enough. Next, dry them in the sun or beside a fire. Aside from scarcity, the other more critical factor is age. Like wine, the older the peel, the better its taste, aroma, and body. Those under 10 years of age are simply called tangerine peel; those 10 years and older are referred to as aged peel. At such antiquity, the colour of the peel takes on a beautiful dark golden brown and its scent becomes robust, earthy and aromatic.
In the eye of TCM doctors, this is a useful herb that can cure the sickness to save the patient besides of the food benefits. This herb is deemed as acrid, aromatic, bitter, and warm in nature by Traditional Chinese Medicine. It covers at least three meridians – lung, stomach, and spleen. Its principal functions are to regulate qi-flowing for strengthening spleen and remove dampness to reduce phlegm. Its basic indications and uses include fullness and distention in chest and stomach duct, reduced appetite due to vomiting and diarrhea, and excessive phlegm induced cough.
Chen Pi has lungs, cough, phlegm, spleen, Shun Qi, thirst efficacy, is young and old (especially the elderly, acute and chronic bronchitis and cardiovascular disease) are excellent eating fruit.
1. Effects on the digestive system: dried tangerine peel contains volatile oil of the gastrointestinal tract has a mild stimulating effect, can promote the secretion of digestive juices, excluding gas accumulation within the intestine, showing the effectiveness of aromatic and carminative lower stomach gas.
2. Cardiovascular system: dried tangerine peel decoction, ethanol extract of the like can be excited myocardium, but rather appear to inhibit overdose. In addition, it can produce a mild contraction of blood vessels, increase blood pressure quickly. Dried tangerine peel pectin high-fat diet-induced atherosclerosis also have some preventive effect.
3. The role of the respiratory system: dried tangerine peel contains volatile oil with a pungent passive expectorant effect, easy to spit sputum. Dried tangerine peel weak decoction of bronchial dilatation. Its high alcohol extract of asthma titer.
4. The role of the genitourinary system: dried tangerine peel decoction can renal vasoconstriction and decreased urine output.
5. Anti-inflammatory effects: decoction dried tangerine peel with vitamin C, vitamin K and used, can enhance the anti-inflammatory effect.
Brewing guide: Normally it is cut into shreds before the serving, in the raw form usually. Normal dosage is from 3 to 9 grams, in decoction usually.