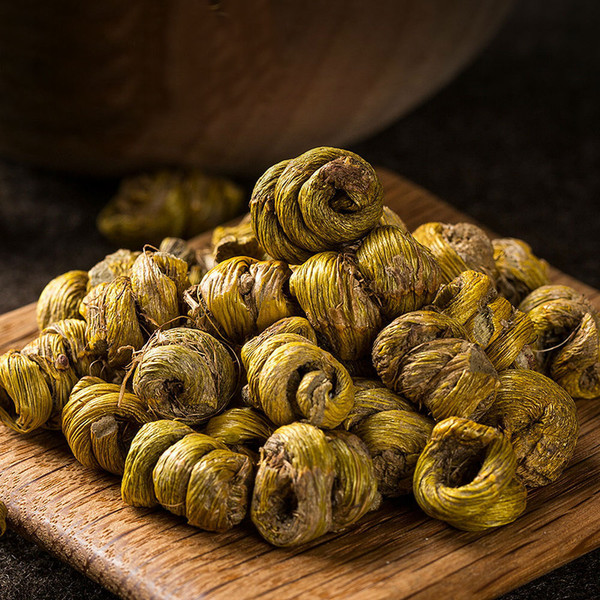 Type: Herbal Tea
Origin: China
Packaging: Bag
Description: Dendrobium officinale, also named Shih-hu, is actually the stem of an orchid native to South and Southeast Asia. It has been used for medicinal purposes in Chinese culture for many centuries. Dendrobium is a type of orchid. The plant consists of a long, thin stem, which is golden yellow in color, with a flower at the end. Different varieties of dendrobium have different colors, but the most common colors are yellow and pink. The stem is used in herbal remedies.
For thousands of years, people in south China will risk their lives to pick the “immortality herb” grown in the edge of cliffs for saving patients in critical condition. You might have guessed by now that the herb mentioned is called dendrobium. In the legends, the juice of it can resurrect the dead. Of course, this is just a legendary saying but can offer another perspective on reviews of its rarity and efficacy. Otherwise, it wouldn’t be called as “gold in medicine”. Besides, it is highly regarded as the No. 1 of the 9 “Chinese immortality herbs”. And its top 9 main health benefits are as follows:
1) Nourishing Yin and body fluid. The “China Pharmaceutical Dictionary” claims that it is specialized at nourishing qi and fluid in lung and stomach. Hence, it treats a variety of diseases caused by deficiency of yin and body fluid;
2) Enhancing physical fitness. It can tonify kidney essence, nourish the stomach Yin, and increase strength. And it is rich in polysaccharides that enhance immune function;
3) Replenishing spleen and stomach. It is a commonly used herb for stomachache and epigastric pain. And modern medical experiments confirmed that it has a better inhibition on the pathogen Helicobacter pylori that is frequently found in spleen and stomach diseases, such as atrophic gastritis, superficial gastritis, duodenal ulcer, and more;
4) Protecting liver and gallbladder. It has a good choleretic effect, which has been praised highly by many herbalists. As a result, it is often used as a major medicine for hepatobiliary diseases, such as hepatitis, cholecystitis, gallstones and others;
5) Strengthening tendons and lowering lipid. The secretion of Yin fluid and function of bone and muscle would begin to gradually decrease during the middle ages. Since it can nourish Yin fluid and lubricate joints, it helps to strengthen tendons and bones, relieve joint pain, and reduce rheumatism. And modern pharmacological research also showed that it can improve stress ability, prevent or stop fatigue, increase hypoxia tolerance, promote circulation, dilate blood vessels, and lower blood cholesterol and triglycerides;
6) Lowing blood sugar. It has long been used as the specific herb for diabetes since ancient times thanks to its ability of nourishing yin, clearing heat, and moistening dryness. Clinical studies have shown that it cannot only enhance activity of insulin, but also significantly reduce and change blood sugar levels back to normal;
7) Improving eyesight. It was also viewed as one of the best eye tonics in the eyes of ancient physicians because of its yin-nourishing and eyesight-improving properties. And modern pharmacological studies confirmed that it could make a difference on the prevention and treatment of senile cataract and children’s eyesight;
8) Nourishing the skin. Due to dwindling Yin fluid in body, the aging of skin speeds up in people in middle age. Therefore, the skin begins to turn black and become wrinkle. This is where the dendrobium gets in since the mucus it contains can moisturize and provide nutrition to the skin;
9) Prolonging life. The “Shen Nong’s Herbal Classic” reviews that it is an effective medicine that can help weight loss and longevity. Modern pharmacological studies confirmed that it contains many trace elements, which are closely related to human health and longevity. Hence, it has more comprehensive anti-aging effect compared to other herbs.
How to use: The typical recommended dose of dendrobium is between 6-12 grams, which is boiled in water and used as a tea. Larger doses (up to 20 grams) may be used depending on the condition being treated.