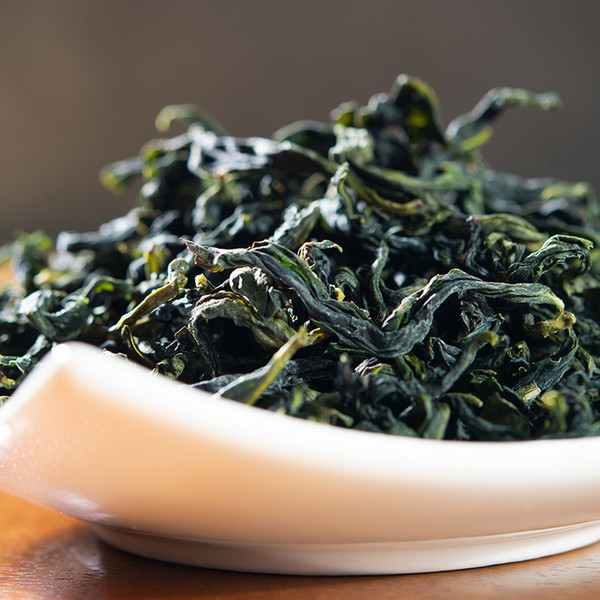 Origin: Taiwan, China
Type: Oolong
Packaging: Bag
Description: Pouchong is an oolong tea from Taiwan. Pronoucned “Bao Zhong” in Mandarin, it is the lightest and most floral of all the oolong teas. It is only 8-10% oxidized and actually falls somewhere between a green tea and a standard oolong tea. It is usually classified as an oolong though, as it lacks the sharper flavor of a green tea. Instead, it has a rich, mild taste with a floral and melon aroma.
Since Pouchong tea is only barely an oolong tea (and one that many people actually classify as a green tea) is is very delicate and mild, with a sweet, floral fruity flavor. Many consider it to have the best of both worlds: green tea and oolong tea. The name actually refers to a part of the processing method. Baozhong (Pouchong is an older way of writing the same word in our alphabet) in Mandarin means “wrapped in paper”. It is no longer processed this way today, but in the past, the leaves were wrapped in paper during the drying process.
This oolong tea is produced at a low altitude of 400 to 800 meters above sea level in Pinglin District, New Taipei, Taiwan, which is a cloudy and foggy area, so it does not get much sunlight. This results in more antioxidants, vitamins and minerals in the leaves. Its main season is spring, from March to April with a second season in winter from October to November. It is generally picked toward the end of March and the larger dark leaves are used.
After picking, the leaves are withered to remove some of the moisture. This begins outdoors under the sun and continues indoors over night. After this, they are briefly tumbled. This serves to break the cell walls to encourage oxidation, but this process is very short, unlike with most oolong teas, which is the main reason this one is so much less oxidized. Traditionally, the leaves were then wrapped in paper and dried to prevent oxidation. Today, they are heated to dry them further and halt the oxidation process. The temperature used is only 70 degrees Celsius, which means the leaves are not roasted. This is another big difference between Baozhong and most other oolong teas. The final appearance of Pouchong leaves resembles a rope and is curled up, with a deep green color and small light-gray spots.
Bao Zhong tea was actually produced in mainland China first, but was brought to Taiwan in the late 19th century. It was planted in a subtropical jungle near the capital Taipei.
Today it is still grown in this area, though moved slightly. It began in the Nangang district, but nowadays, most of the production takes place in the neighboring Wenshan and Pinglin districts. At first, it was always scented with jasmine blossoms, but the production process evolved a lot during the Japanese occupation. As a result of the newer production methods, the tea became more floral, eliminating the need to add any additional floral flavoring, like jasmine. At the time of Japanese occupation, business boomed as the Japanese purchased so much tea that production had to expand considerably to meet demand. That is when production went from just Nangang district to also including Wenshan and Pinglin districts. When the Japanese left, sales suffered. Farmers in Nangang moved on to other crops, but those in Wenshan and Pinglin continued growing this Taiwanese oolong tea and do so until this day.
Pouchong gives off a floral and melon fragrance and has a rich, mild taste, with notes of sugar and cream.
Brewing Guide: In a prewarmed gaiwan place 1-2 teaspoons of leaf and quickly flush with hot water. After appreciating the rich aroma of the damp leaves, cover with 90°-95°C (194°-205°F-near boiling) water and infuse for 3-5 minutes. (Lower water temperature for more floral notes, heighten water temperature for more intensity.) Pour off into prewarmed tasting cups and repeat, gradually increasing steeping time and water temperature.