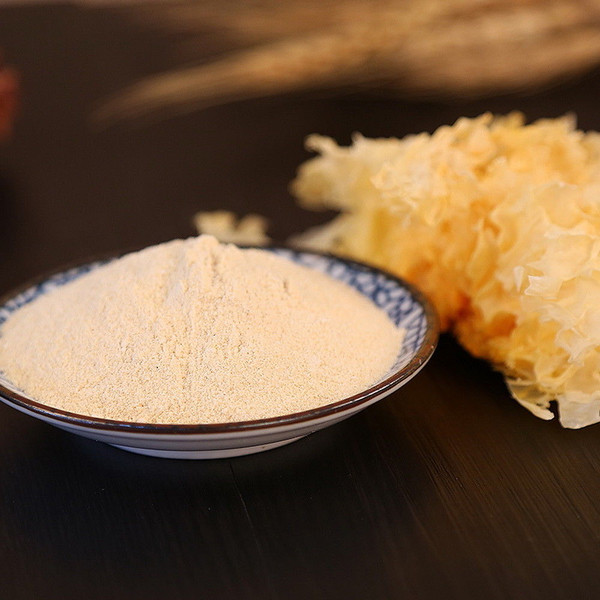 Type: Herb
Packaging: Bag
Origin: China
Description:
White fungus (tremella fuciformisis) is also known as snow fungus. It is commercially cultivated due to it's popularity in Chinese cuisine and medicine. It is wildly found on the dead branches of broadleaf trees. In Mandarin Chinese, it is called silver ear or Bai Mu Er. Snow fungus is a white, nearly translucent, "trembling" fungus throughout Asia and in warmer climates worldwide. The fungus gets the common name of wood ear for the way it looks on the decaying logs on which it grows. Good-quality snow fungus has a pale, yellowish-white color and a mucilagelike texture. Chinese and Japanese herbalists have used snow fungus for more than 2,000 years, primarily to increase fluids in the body, for dry coughs, and for palpitations. It has been used as a tonic herb and as a beauty enhancer to improve the complexion.
White fungus is known for its medicinal benefits, namely anti-inflammatory. In Chinese families, it is commonly used in soups. It is eaten because it nourishes the body, heals dry coughs, clears heat in the lungs and keeps skin young. In traditional Chinese medicine, Snow Fungus is listed in the highest category of herbs, with indications including:
â_?Clearing heat and moistening dryness
â_?Nourishing the brain and enhancing beauty
Snow fungus is an immune stimulant that may help fight infection as seen in cell studies. Laboratory studies have found that it also demonstrates lowers levels of low-density lipoprotein (LDL, or "bad") cholesterol, protects the liver, and fights inflammation, and that it may slow the ageing process.
Benefits of snow fungus for specific health conditions include the following:
Cardiovascular health– Snow Fungus is eaten to help prevent atherosclerosis in Japan and provides support for the cardiovascular system by:
â_?Helping maintain the health of blood-vessel walls
â_?Helping prevent clots and enhance circulation
â_?Lowering cholesterol
In this respect its actions are similar to the closely related Wood Ear (Auricularia auricula /Auricularia polytricha).
Anti-ageing– As well as their benefits for the cardiovascular system, Snow Fungus’ polysaccharides combine a number of other anti-ageing properties:
â_?Increasing the superoxide dismutase activity of the brain and liver.
â_?Promoting nerve growth
â_?Assisting with improving learning and reducing memory deficits
â_?Supporting skin-health, including as a moisturizing agent in cosmetic preparations
â_?Anti-inflammatory
Protection from radiation– Snow Fungus polysaccharide-based products are used in China to help patients undergoing radiotherapy by:
â_?Supporting the immune system
â_?Maintaining white blood cell counts
â_?Alleviating skin dryness and redness
All natural, 100% Tremella Fuciformis Powder. The Tremella medicinal mushroom powder that we offer is completely organic, and is derived from the whole mushroom and processed and ground with meticulous care. The powder is gluten-free and lactose-free and is suitable for Vegans and Vegetarians as a health supplement.
How to use: As a dietary supplement, mix about 1-2 measuring spoons (included in package) of powder into a beverage and drink it before or after a meal, or mix powder directly into your food.