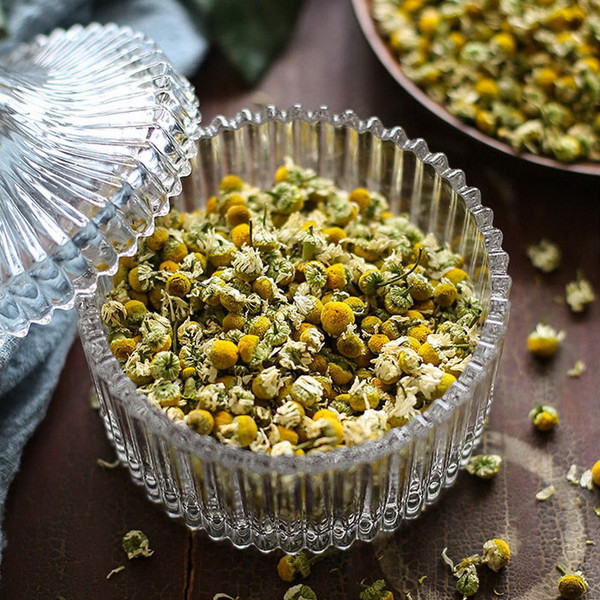 Type: Herbal
Packaging: Bag
Origin: China
Description: Chamomile tea is made from the flower heads of the chamomile plant. The medicinal use of chamomile dates back to the ancient Egyptians, Romans and Greeks.
Derived from the Asteraceae family of plants, the flowers of this plant can be dried and used for different herbal and natural remedies and poultices, as well as its most popular form – tea.
Apart from the pleasant taste and accessibility of chamomile tea, it has been praised over the years for its health benefits. The presence of flavonoids, sesquiterpenes, and other powerful antioxidants in this tea have significant effects on the human body. While it is commonly consumed as a beverage, the liquid can also be topically applied in certain cases to get relief from various skin issues. These include its ability to protect the skin, lower stress levels, regulate sleep, and soothe menstrual symptoms. It also boosts the immune system, treats gastrointestinal issues, and manages diabetes, among others. Benefits are:
Skin Care
Due to the anti-inflammatory and antioxidant-rich nature of chamomile tea, it is not exclusively used as a beverage. You can topically apply warm or cold chamomile tea to the site of irritations or skin conditions such as eczema. Research has shown that this sort of direct application can significantly improve healing and lessen the appearance of blemishes and wrinkles on the face. Eliminating oxidative stress and boosting the immune response in these areas can do wonders for your skin.
Boosts Immune System
If you want to strengthen your immune system to ward off infections, chamomile tea is the answer. There are a certain amount of phenolic compounds in chamomile tea that are specifically linked to fighting bacterial infections in the body. Studies have shown that 5-6 glasses of this tea over a course of two weeks can significantly improve the body’s ability to fight infections.
Relieves Menstrual Discomfort
The anti-inflammatory nature of chamomile tea makes this relaxant a popular choice for women dealing with the symptoms of menstruation like bloating, cramping, anxiety, sweating, inability to sleep, and mood swings. Chamomile tea can directly affect many of these symptoms by soothing the mind and body and reducing inflammation that may be causing discomforts.
Relieves Stress
One of the most popular uses of a cup of chamomile tea is in the treatment of stress and anxiety. After a long day at work, the warm, soothing nature of this beverage can help increase the levels of serotonin and melatonin in your body. These hormones can successfully eliminate stress and worry, while also slowing down your mind and eliminating the classic symptoms of anxiety. 1-2 cups of chamomile tea per day can do a significant help against chronic stress. Again, while pregnancy can be a stressful time and its consumption can cause an increased risk of miscarriage.
Induces Sleep
In a similar way that chamomile tea can ease stress and worry, it can also be an overall sleep aid, particularly for people who struggle with restless, non-restful or rejuvenating sleep. Even those struggling with sleep apnea and other disorders may benefit from the effects of chamomile tea. Drinking a warm cup of non-caffeinated chamomile tea can help you fall asleep faster and wake up feeling more refreshed.
Manages Diabetes
Research has shown that chamomile tea can be useful for people suffering from diabetes. By helping lower blood sugar levels and regulating the amount of insulin in the blood, the powerful organic chemicals in it help to eliminate massive drops and spikes in blood sugar.
Treats Stomach Disorders
If you are suffering from stomach irritation, ranging anywhere from mild bloating to IBS symptoms, chamomile tea can be a major help. It has anti-inflammatory properties that help ease the twisting nature of your gut and allow for the passage of gas and smoother bowel movements. A single mug of chamomile tea can make you feel better, and its continued use can help prevent serious conditions from developing in your gut.
Hair Care
Apart from all of the impressive attributes of chamomile tea, many users claim that it improves the appearance and strength of the hair. While the anti-inflammatory components can help alleviate irritation on the scalp, the stronger chemicals can fortify the strands of your hair, eliminate dandruff, and generally give your hair a better, silkier look.
Treats Allergic Reactions
Although chamomile is an allergen to some people, such as those who are allergic to ragweed, daisies or chrysanthemum, it can help modulate the immune response to allergens in the body. By working as an anti-histamine, a cup of chamomile tea can soothe these allergic reactions throughout the body, thereby preventing the symptoms before they become serious.
Brewing Guide: To prepare the tea, 3-5 Chamomile buds are steeped in hot water (usually 90 to 95 degrees Celsius after cooling from a boil) in either a teapot, cup, or glass; often rock sugar is also added, and occasionally also wolfberries. Add a little more honey can increase the deliciousness of the tea.