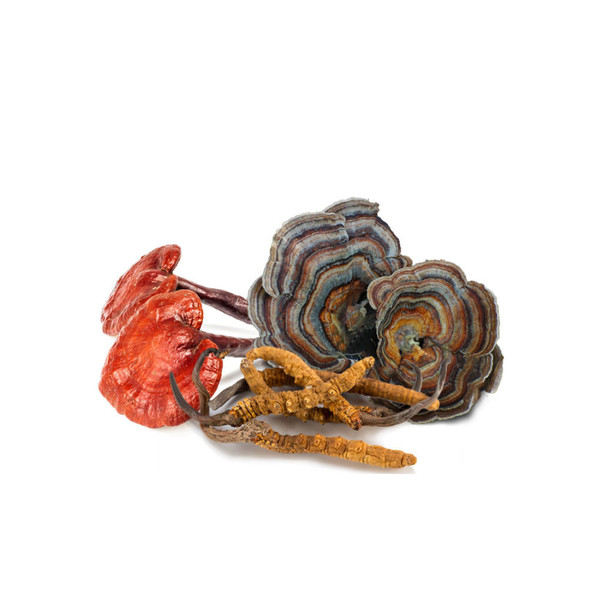 Termitomyces is a valuable edible fungus in Yunnan. It's meat is tender, sweet and tasty. Termitomyces contains calcium, phosphorus, iron, protein and other nutrients.
It grows in remote mountain forests, on the unpolluted slopes of Yunnan's red soil, or the termite nests on the side of fields. The bacteria crown is a knoll like garlic, it then gradually expands in an umbrella shape, stipe solid, smooth surface. The tender meat breaks easily.

Cauliflower
The Cauliflower mushroom (Sparassis Crispa) is a large, capless mushroom composed of clusters of frilled, leaf-like branches emerging from a joined base. Its appearance resembles a coral reef, though its name suggests it looks like a head of cauliflower. Its surface and flesh color are both ivory white to pale cream. The mushroom gives off deep aromas of musk and earth. The flavor is mild with notes of fennel and almond. Cauliflower mushrooms contain a constituent called sparassol, which is an anti-fungal and antibiotic. The leafy mushroom also contains beta-glucans.

Irpex lacteus
Irpex lacteus is a crust fungus distributed throughout temperate areas of the world. Irpex lacteus is a white-rot fungus that inhabits mainly angiosperm branches and trunks. Due to this variability and abundance of the species it has been described as a new species to science numerous times.

Beneficial effect on physical stress
Pull impurities from the lungs and digestive system
Counteract the effects of radiation and chemotherapy
Discourage fat absorption
Enhance stamina, and also in reducing fatigue
Promotes the antibody production in the body
Enhancing the basic anti-viral capabilities of the body

Elm Eear
Gloeostereum is a genus of fungi in the family Cyphellaceae. This is a monotypic genus, containing the single species Gloeostereum incarnatum, an edible mushroom native to China. In Chinese culture, it is called Yuer (literally "elm ear").

Yellow Brain Fungus
Yellow brain mushrooms (Tremella mesenterica) can be found growing wild in China’s Yunnan province in the southwestern part of the country that lies just north of Myanmar and Laos. Yellow brain mushrooms are predominantly found along the Jinsha River Basin, and are still largely consumed there. They were first identified and named by American mycologist Lewis David von Shweinitz in 1822. It can be found growing on dead or decayed oak and some other hardwoods.

Niu-Chang
A unique and rare health-promoting mushroom species native to Taiwan's old growth rainforest, Antrodia or Niu-Chang is virtually unheard of in the Western hemisphere. In the wild, this orange-red mushroom grows inside the hollow trunk of one specific kind of tree named "Chang tree" (or the Cinnamomum kanehirai), found exclusively in Taiwan's mountain regions. Only mature Chang trees over 100 years old provide the right conditions for Antrodia to grow. Considered "Taiwan's National Treasure", Antrodia, in the wild is found nowhere else in the world. Both the fruit bodies and the mycelia have been shown by research studies to contain powerful, bio-active compounds.